Foreign students fall in love with Ireland, despite housing problems

Over half of the foreign students surveyed by SEDA said they experienced difficulties with finding accommodation in Dublin, and, shockingly, 30% reported some racial discrimination. However, despite these complaints, 92% considered Ireland to be an attractive destination for learning English and 90% said they would encourage their family and friends to visit.

SEDA College conducted the survey in November 2016 to gauge the students’ experience in Ireland. A representative sample of over 120 learners took part, hailing from 19 different countries. In line with the general international student population, most were between 20 and 30 years of age.

SEDA asked the students to rate the factors that influenced their decision to come to Ireland in the first place. 40% of those surveyed said they decided to go because they had friends who have been to the country. Ireland’s close proximity to London and Europe was another strong factor, with 26% picking it as the most significant. Other reasons to come to Ireland included its affordability, compared to the likes of the UK, Canada and New Zealand. Some students (20%) simply wanted to visit Ireland for a trip, and a further 18% said they heard it was a great place to study.

The vast majority of students self-funded the trip, with only 7% receiving some form of financial assistance from their country of origin.

The majority of students (53%) said they experienced problems finding accommodation in Dublin, with the vast majority reporting that renting was more expensive in Ireland compared to home.

When asked about how welcome they felt in Ireland the majority (76%) said they found the Irish people to be welcoming and friendly. 15% said they have experienced some negativity, while 8% confided that they did not feel welcome at all. Shockingly, when asked about whether they have experienced any racial discrimination in Ireland, 30% reported that they had.

Be that as it may, most students have apparently fallen in love with Ireland, with 42% saying they would like to stay here permanently after finishing their studies, and 36% choosing to spend a couple more years on the Emerald Isle. Over half of the students said they would consider setting up a business in Ireland. 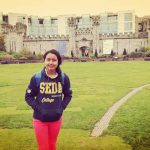